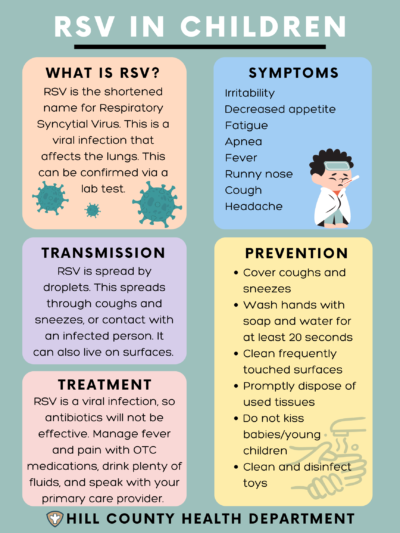 Respiratory Syncytial Virus (RSV) is recognized as one of the most common causes of childhood illness.

More specifically, RSV is the leading cause of bronchiolitis and pneumonia in U.S. children aged less than one year, and especially infants born prematurely. Each year in the United States, approximately 75,000 to 125,000 children aged <5 years are hospitalized because of RSV complications. Palivizumab (Synagis®) is a monthly prophylactic treatment that has reduced the incidence of RSV infections in high risk infants and children by about half during a typical RSV season. Palivizumab is not typically covered by insurance companies without prior authorization of eligibility criteria brought forth from organizations such as The American Academy of Pediatrics (AAP).

Click here for a printable flyer from the CDC.

Click here for a printable flyer on RSV in Older Adults.